Nette Sheram Hudson, part of the group of believers that started TCF in November 1969, passed from this life into eternity with her Lord and Savior on March 4, 2017 after about five days hospitalization.  She was loved by family and friends, and by her church family at TCF, and will be much missed by all.  This page is to remember Nette and honor her Godly life.  You can go to this link to read or add personal tributes or memories of Nette.  At this link, you can hear the audio of the entire memorial service (including about 14 minutes of piano prelude) held at TCF on March 8.  You can also watch the video with music that played during the service. 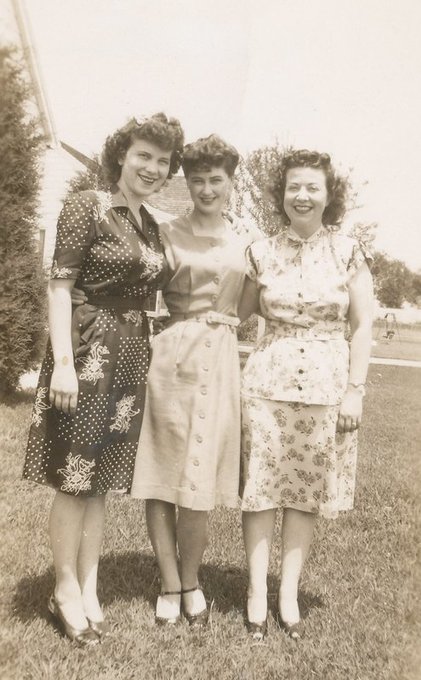 Nette (left) with Florine Gann and her sister Martha Wilson
Nette Hudson
Nette Lucy Hudson was born in Broken Arrow, Oklahoma on August 12, 1922,  the daughter of Washington “Wash” and Rosa Mae Sheram.  Nette lived in the Tulsa area or Broken Arrow for all of her life, and graduated from Broken Arrow High School in 1940.   Nette contracted Polio when she was 8 and broke her back when she was 12, both leading to a variety of physical
challenges that marked her life.  Yet, she exhibited a mental and spiritual
toughness that also defined her life, not allowing these and other physical
infirmities to keep her from the things she wanted and needed to do to serve
her family and serve the Lord.

Nette married Willard Hudson on July 25, 1942 just days before Willard was
sent overseas to the South Pacific to fight for U.S. forces in World War II.
They were separated for about 3 years before Willard returned home.

Nette was faithful to care for her daughter Shari Greyson, after Shari was
diagnosed with MS.  Willard and Nette together raised their grandsons Ashley
and Adam when Shari became physically incapable.

Nette was a wonderful homemaker and loved spending time with her family.
She also did receptionist and clerical work in a local clinic for many years.
Her  life was marked by her volunteer service to the churches she was a part
of, and  most significantly, she was a faithful member of Tulsa Christian
Fellowship until  her death. Nette and her late husband, Willard were part of
the group that  founded Tulsa Christian Fellowship in November of 1969, and
led house  churches during their years together.

Nette lived the last seven years of her life at Broken Arrow Nursing Home,
where she befriended many of both staff and fellow residents.

Nette passed into the presence of the Lord on Saturday, March 4, 2017 at the
age of 94.  She is survived by, her grandsons, Ashley Sean Greyson and wife
Mindy, of Franklin, TN, and Spencer Addam Matthew Greyson and wife Jenny,
of Tulsa, and ten great grandchildren.

Her husband Willard preceded her in death in 1995.  Nette was also preceded in death by her parents, her daughter Shari Greyson, sister Martha Wilson and brothers Bill & Oscar Sheram.