Papers are available in pdf format at this link. 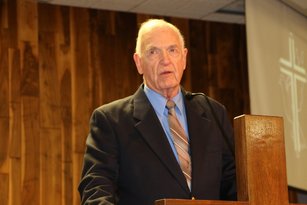 ​James W. Garrett Now serving as an elder of Tulsa Christian Fellowship (TCF), writer and teacher Jim Garrett’s life has been shaped by a diverse background. That background, experience, and continual seeking of God’s direction, has helped to make Jim an asset to many churches, through his mentoring of leaders and the sound Biblical insight he has provided in the books, papers and studies that he has written.

Jim was born October 5, 1930 in Muskogee, Oklahoma. Except for seven years of study and ministry in Ohio, he has been a lifelong Oklahoman. He married his wife Barbara in 1949 (she departed to be with Christ in 2008); the couple has five children, thirteen grandchildren and eight great-grandchildren.

During his school years, and for several years afterwards, Jim was an avid clarinetist, participating in performances with civic orchestras, bands, and small ensembles. After high school, Jim worked for the Katy Railroad for nearly four years. In the fall of 1952, he left that employment to enroll in The Cincinnati Bible Seminary (CBS), from which he received his Bachelor of Arts Ministerial Degree in 1957. While in college, he was employed as a laboratory technician with the Rusco Chemical Company, and was the minister of the Saltair Church of Christ. Following his graduation, Jim became the minister of the Mowrystown/Union Churches of Christ in Ohio. In October, 1959, he moved back to Oklahoma to become the minister of the Bellaire Christian Church in Tulsa.

During his years with Christian Churches, Jim participated in multifaceted ministry activities, including providing leadership in the planting of 13 churches in Northeastern Oklahoma, serving as teacher and manager of Sunset Bible Camp, board member of Midwest Christian College, guest lecturer in Bible colleges, and leading many evangelistic and revival meetings. His earliest professional writing experience came when he served as editor, for twenty years, of Northeastern Oklahoma Evangelistic Association Journal, and also contributed articles for The Christian Standard, The Standard Lesson Commentary, and The Standard Daily Devotional.

After several years of an ongoing relationship with the pastors of TCF, Jim was asked to join TCF’s leadership team in February, 1981. At that time, TCF was in the midst of implementing a New Testament church model for its leadership, and Jim’s role helped move that process toward fruition.

During his early years at TCF, Jim founded Tulsa Bible Seminary, and served as dean and teacher. By 1987, as TCF’s New Testament church leadership style solidified, many churches from across the country asked for Jim’s help in implementing a similar model. That year, he founded the Conclave of New Testament Church Elders, with a meeting in Tulsa to which church leaders were invited to mutually pursue New Testament truths. Since then, the Conclave has moved its annual meeting to a retreat center in St. Louis. Leaders from more than 30 churches have attended through the years. Jim still serves as a member of the planning committee for each year’s Conclave, and presents at least one research paper each year.

Throughout his years in church leadership, Jim has been involved in world missions. TCF is a church that is dedicated to the preparation and releasing of workers into the harvest. For five years, he was on the board of University Language Services, an international mission organization. In 1991 he and another TCF elder, Gordon Wright, began a series of trips to the former Soviet Union to minister among the unregistered churches in Russia, Ukraine, and Central Asia. These trips continued through October, 1993. He has returned to the Ukraine to teach in the Ukrainian Bible School, a school that came into existence out of the vision that he had for training leaders.

In recent years, Jim has authored dozens of research papers and essays on Biblical themes, with a special focus on the New Testament church. He has published two books, New Testament Church Leadership, and The Doulos Principle.

Now, in what for many men would be their "retirement years," Jim continues in productive ministry through research and writing, ministry at Tulsa Christian Fellowship, serving as consultant and mentor to church leaders, and as a guest teacher and speaker in churches and ministry groups. The theme of his book, The Doulos Principle, is a picture of the guiding force in Jim’s life. His one desire is to be a faithful "slave" of the King. His signature signoff speaks clearly of Jim’s resolve — he signs his emails and letters, "your fellow slave."