Join us for the TCF 2020 Missions Conference, with the schedule as follows:

Terre was born and raised in Atlanta, Georgia. He came to faith in Christ while a freshman at Georgia Tech. He
graduated  from Tech in 1976 with a Bachelor of Science Degree. Terre later attended Columbia Biblical Seminary,
completing a Master of Divinity degree in 1981. After graduating from seminary, God allowed Terre to have a part in
starting Cornerstone Bible Church in a south Atlanta suburb. He served as pastor of this missions-minded congregation
for twenty-four years.

Since 2005 Terre has served with Operation Mobilization. OM exists to see vibrant communities of Jesus followers among the least reached. Terre’s passion is to mobilize U.S. pastors and churches to send Good News to the three billion people who have little or no access to the Gospel. Through a ministry of preaching and teaching, Terre loves to connect people to God’s Word and what God is doing in the world. He also connects with pastors and churches to facilitate relationships between U.S. churches and OM ministries worldwide.
Terre is one of the founding members of the “Round Table,” which first convened in 2007. The “Round Table” is a multi-church, multi-ministry network focused on seeing more African Americans mobilized into global disciple making.
Terre and his wife Susan have been married since 1975. They have two grown sons, both married, and three grandchildren. Terre and Susan are members of New Hope Baptist Church in Fayetteville, GA. They love being part of this ethnically diverse congregation. When he is not involved with OM or church, Terre enjoys spending time with Jesus, being with his family, exercising, and keeping up with Georgia Tech sports. 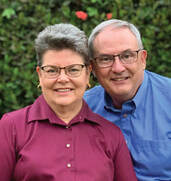 Dan and his wife Mary Lu were released into full time missions service by TCF in 1978, and have since served largely in Honduras, where they have served in local church development though evangelism and discipleship, radio broadcasting, and a variety of other ministries. In recent years, Dan and Mary Lu have developed a national and international ministry in mobilizing churches for the Great Commission. Dan says, "Honduras is a reached nation, but not a sent nation."  With the goal of sending Latin missionaries around the world, they are working with an international interdenominational group called Simply Mobilizing to encourage churches in Honduras, Central America, and across the Spanish speaking world to fulfill the call of God to reach the nations. They work with all churches, using courses and programs that are specifically designed to form a Biblical worldview. Dan works in Honduras, Nicaragua, Peru and Spain while Mary Lu focuses more on ministry in Honduras. They are passionate about seeing missional churches developed throughout the world. Their heart’s desire is to see a mobilization movement in Latin American churches equipping and facilitating God’s people to be on mission with Him, both in their own culture and in the unreached nations.