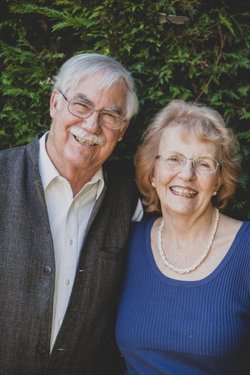 The Livingstones have spent 50 years among Muslims in India, the Arab World, Europe, North America and Malaysia. Greg was instrumental in founding both Operation Mobilization and Frontiers, and served as North American Director of Arab World Ministries. Presently, loaned from Frontiers, he is the Senior Associate of World Outreach of the Evangelical Presbyterian church. Greg & Sally have
facilitated the placement and coaching of 1400 long term missionaries serving in 40 countries with these and other agencies.

Both World Outreach of the Evangelical Presbyterian Church, and Frontiers, a missions sending agency, seek to glorify God by planting churches via teams to Muslim peoples who are without national churches in their midst.

Serving with a Pakistani pastor, the Livingstones spent recent years birthing the first church among Pakistani Muslims in Britain.  Now based in the Los Angeles region, Greg is back to his favorite endeavor for Christ’s Kingdom: Recruiting Team leaders and team members for new Church
planting teams to minister long term “where there is no church”…or extremely few nationals who are able and willing to risk ministry to Muslims.
Countries of focus to Muslims include Libya, Syria, Baghdad, Iraq, Eritrea, Pakistan, Afghanistan, the Tatars in Siberia; the Chechen in the Caucasus of Russia, and Bihar, India.  In the equipping areas, Greg specializes in the history of ministry to Muslims. He is convinced that effective discipling and church-planting requires a thorough knowledge of past endeavors. He is presently writing a textbook: Reflections on the history of Protestant Mission To Muslims.

Greg is from Aspen, Colorado and Sally grew up in Pittsburgh, PA. They met at Wheaton College. Greg has his doctorate from BIOLA University in Missiology. Sally has a M.S. degree in Family Counseling from Villanova University. The Livingstones have three sons, Evan, a lawyer, David, a professor of British Literature and Paul a teacher/musician of World Music, born in India, Germany and Lebanon. The Livingstones have seven grandchildren.  The Livingstones’ life story is published as You’ve Got Libya, available in bookstores or via Amazon.
Other publications: Church Planting in Muslim Cities; The Muslim World: A Presbyterian Mandate; 4 Commentaries for missionaries: Matthew, Acts, 2 Corinthians, and Philippians 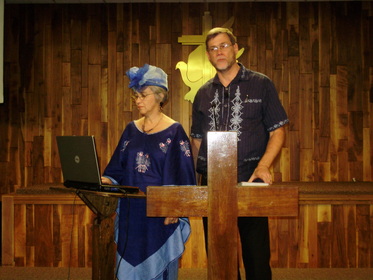 TCF missionaries since 1978, the Harrisons both teach at FATEAC, a Christian and Missionary Alliance seminary in Abidjan, Cote D'Ivoire (Ivory Coast).  There, they train and equip African pastors from many French-speaking African nations for ministry in their home countries.

Both graduates of Oral Roberts University, the couple began attending TCF while in college.  They left as missionaries from TCF and first lived and worked in Zaire (now the Democratic Republic of Congo), until they were forced to flee that post when there was a revolution.  They spent 10 years in France, where Randy served as pastor in two different French churches.  After earning his doctorate at Faculté Libre de Théologie Evangélique in Vaux sur Seine, France, they later joined C&MA so Randy could teach at FATEAC, but soon were forced to leave Ivory Coast, where there was unrest and a change in government.  They spent a few years in nearby Burkina Faso, before returning to Abidjan.  Deanna recently earned her doctorate, and also teaches at the seminary.

Randy has published, in both English and French, a book, Overwhelmed by the Spirit.  The Harrisons have three grown children, all serving with their spouses and families, as workers in different parts of the world.