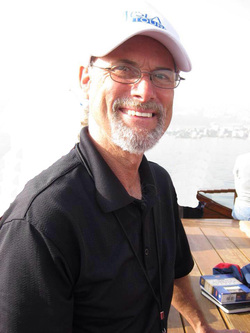 Our brother in Christ, faithful servant of the Lord, faithful minister at Jesus Inn, and faithful member of TCF, passed into eternity Wednesday, November 12, 2014 after a sudden illness.  On this page, we share memories of our brother.
You can also visit this page and sign an online memory book.
Michael K. Ferrill

Mike was born August 26, 1952 in Coral Gables, Florida, the son of Maxwell and Dorothy (Blake) Ferrill. He died Wednesday, November 12, 2014 at Hillcrest Medical Center in Tulsa, Oklahoma. He was 62 years of age.

Mike married the former Miss Dawn Dykema on November 25, 1995 in Tulsa, Oklahoma, at Tulsa Christian Fellowship (TCF), where they were members their entire marriage, and where they both served faithfully.

From the time of his salvation, Mike was captured by a compassionate heart for people – not only to see those apart from Christ come to Him for salvation and eternal life, but also for those Jesus called “the least of these,” those who were needy, down and out, and in need of loving friendship.

This heart was reflected by the things into which he put his time and energy. For more than 35 years, Mike was a vital component of the ministry of Jesus Inn, which when he started was a drug and alcohol recovery and rehabilitation center, and ministry to transient street people.  There, he counseled runaways and drug addicts and those with mental illnesses, and those who needed Jesus, and sought to bring them real hope in Christ and move them toward healing and wholeness in every part of their lives. In 1984, he became the head men's counselor and served in that role for 11 years ministering to the many men who came through the ministry. Even in recent years, as Jesus Inn has transitioned into a discipleship ministry, Mike’s continued involvement included teaching in the house church meetings, and a big heart of love for all who came his way, as well as serving on the organization’s leadership team.

Also in more recent years, Mike worked part-time with the Mental Health Association, and truly loved his relationships with the many people he encountered there.

Mike married later in life, when he was 43 years old, but very quickly became a loving father and family man.  He loved his two stepdaughters, Danielle and Deanna, and enjoyed raising the children he and Dawn had, Michele and Josiah.  The children report that Mike was a “fun dad,” and his faith in Christ and love for them had a profound influence on the lives of all four children.

Mike owned and operated Appliance Doctor, an appliance repair business. One of his hobbies was riding motorcycles, and even this hobby combined with his love of Christ and desire to see people come into His Kingdom.  He was part of the Christian Motorcyclists Association, and when he died, he was the Chaplain of this group.  He often spoke of his heart for avid motorcyclists and his desire to see them come to faith in Christ.

He enjoyed going camping and fishing with family and friends.

In lieu of flowers, memorial gifts may be made to the Christian Motorcycle Association, (Run for the Sun).

He is survived by his wife Dawn Ferrill of Tulsa, and daughters Danielle and husband Steve Rustin, and his grandson Oliver, Aurora, CO; Deanna and husband Jonathan Hall, Tulsa, OK; and his daughter Michele, as well as his son Josiah, who both live at home.

He was preceded in death by his mother.

Mike's Testimony - Transformed
This was written several years ago, more than nine years after Mike trusted in Christ as His Savior. 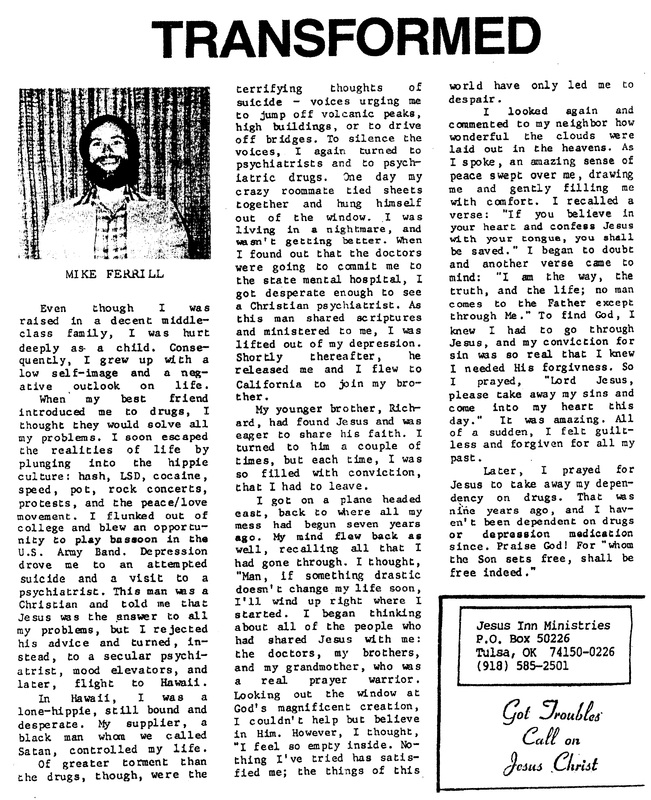